Friday night’s game against Miller was set to be a significant test for the 4-1 Red Scare, a matchup with the only team that had beaten us this year, way back in the first game of the season. But there was no way of knowing just what an epic game we had in store.

With Dylan needing to rest his arm for a travel team doubleheader the next day, it was left to Ben M to take the mound to start the game, and likely to shoulder most of the mound duties for the night. He made quick work of Miller in the 1st inning, getting three straight outs with the aid of a nifty pick of a line drive to the right side by second baseman Ben C. Miller starter Silas was equally impressive in the bottom of the inning, allowing only an infield hit by Ben M while striking out three (though Jordan G reached on a dropped third strike, and then was thrown out attempting to steal).

In the top of the 2nd, Ben M briefly had command issues, hitting the first batter and walking the next. Though he retired the next three on a pair of swinging strikeouts and a grounder back to the mound, both runners ended up scoring thanks to a stolen base and a pair of wild pitches, and Miller had been staked to a 2-0 lead without the benefit of a hit.

Silas was effective again in the bottom of the 2nd, striking out three; he allowed only a double to Sam, who after hitting the ball hard right at fielders in about eight straight at-bats finally connected for a line drive that just cleared the left fielder’s glove. Both sides went down in order in the 3rd, and Ben M kept his hitless string going by allowing only a harmless walk in the top of the 4th.

In the bottom of the 4th, the Red Scare offense finally got to Silas. With one out, Jordan G hit a hard single to right, then made it to second when the throw back to the infield got away. Next up, Ben M and Yates each hit doubles deep to left, tying the score. Silas struck out the next two batters, but Max raced to first on a dropped third strike. (He also managed to strain his hamstring on the play, and eventually had to be removed from the game as a precaution.) Next up was Sam, who blooped a looper just over the head of the Miller second baseman, scoring Yates with the go-ahead run.

Ben M struck out the first batter he faced in the top of the 5th, but #8 hitter Samuel beat out a grounder to third for Miller’s first hit of the ballgame. He then took off for second, and Jordan G pegged him out with an outstanding throw down to shortstop Sam, who was spiked for his troubles. A walk followed, but Ben M picked up his 8th strikeout of the game to send the game to the bottom of the 5th.

Silas pitched another dominant inning with three more strikeouts — in fact, he had three strikeouts in every inning he pitched except the 4th, when he had four (thanks to that dropped third strike to Max), for an incredible 16 strikeouts in five innings pitched. But still, he remained on the wrong end of a 3-2 margin. The game was moving so quickly at this point, though, that we seemed certain to get in a full seven innings before hitting the two-hour time limit.

With Ben M having thrown 77 pitches, Dylan entered in the 6th to close things out. He quickly struck out the first batter he faced, but then walked leadoff hitter Silas. Silas took off for second, and Ben M, now playing shortstop, went to cover the bag — only to have #2 hitter Emmett smack a grounder perfectly through the hole he had just vacated. With runners on the corners, Emmett next took off for second, and Jordan G gunned him down, second sacker Shiloh making a nifty tag; but Silas went home on the play, tying the score at 3.

Still, the Red Scare had two shots at retaking the lead, with the heart of our order coming to the plate. And more promising still, Silas had finally left the game, turning things over to the big righty Samuel.

Jordan G started things off in the bottom of the 6th with a hard grounder to the left side of the infield, but the Miller shortstop made the throw over for the out. Ben M then walked and stole second. But Samuel struck out the next two hitters, and it was on to the 7th.

Dylan was again dominant to start the final inning, striking out the first two hitters he faced. The next, Oliver, drew a walk, then advanced to second on a steal and third on a wild pitch. His successor, Samuel, fought off several pitches before pulling a hard grounder down the third-base line — just inches fair, and also inches away from the glove of diving third baseman Sam. The ball shot through the tiny sliver of space for a double, and Oliver scored the go-ahead run.

The Red Scare now needed the bottom of its order to come up big to have any hope of a win. Sam led things off with a no-doubt single to left. Ben C was up next, and dropped a perfectly placed floater into the no-man’s land in shallow center field, where it found grass as three Miller fielders converged around it. The runners moved up 90 feet on a wild pitch, putting the winning run in scoring position with none out. Taylor worked deep into the count, but ultimately went down swinging; Dylan, up next, did the same. That brought Shiloh to the plate, needing to find some way to bring home at least one runner for a tie, if not both of them for a win.

As it turned out, she didn’t have to do much. The first pitch from Samuel was in the dirt, skipping past Emmett to the backstop, as Sam sped home to tie the game. The very next pitch went to the exact same place, Ben C racing home, and the Red Scare dugout exploded in celebration of one of the most dramatic comeback wins I’ve been witness to in this league. Red Scare 5, Miller 4

This game was nuts: not just all the lead changes, but incredible pitching by both starters, Ben M and Silas (and both relievers, Dylan and Samuel, as well — combined the two staffs struck out 31 batters in just seven innings), great fielding of the few balls that hitters connected with, timely hitting by our squad in our big innings in the 4th and 7th, and enough lead changes and drama for an entire season. Miller will get a chance at revenge next Thursday at 5:30; but first we had a surprise game this morning to play, which will be recapped in my next email. 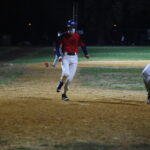 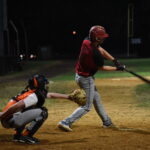 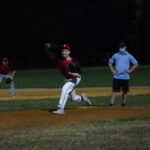 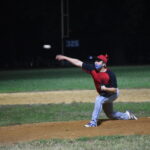 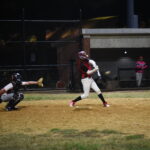 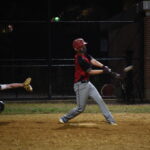 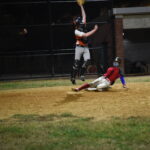 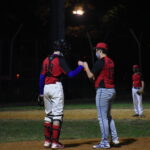 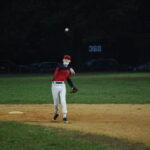