It was the season’s nicest day yet for our morning doubleheader rematch vs. 78 Miller: warm and sunny and springlike, and some fresh dirt had even been added to Prospect Park Field 2 to fill in some of the worst hollows and build a tiny bump of a pitcher’s mound. There was also grass pollen sprouting up everywhere, which made for a sneezy day for me in particular, but you take the good with the bad.

For game one, Ben M took the mound for the Legal Weed and immediately hit some trouble, giving up a one-out single up the middle and a walk, with the lead runner moving up on a wild pitch and the runner on first taking second without a throw. Cleanup hitter Gus then cracked a long flyball to center, where Jordan N deftly snagged it and made a perfect throw to the cutoff man, Ben M, who tossed to Max at third in plenty of time to tag Emmett for the third out, as a run scored on the play.

Miller ace Silas was absent for these games, so big righty Samuel took the mound for Miller, and scattered flyouts to the outfield (plus one single by Sam) to hold the Weed scoreless in the bottom of the 1st. Ben M set Miller’s side down in order in the top of the 2nd (two strikeouts, one nifty grab-and-throw by Max at third base), and it was on to the bottom of the 2nd.

Samuel struck out the first batter he faced in the bottom of the frame, threw a strike to Taylor … then called his coach out to the mound. After a couple of warmup tosses, he determined that he had tweaked something in his side and couldn’t continue, bringing reliever Oliver to the mound. He was rudely greeted by Taylor’s line double down the left-field line, then another two-bagger by Max, this one a shot to center field that tied the score at 1 apiece. Ben C and Yates drew walks, then Jordan N did as well on four pitches, giving us the lead, though Ben M was denied a chance at his second grand slam in as many games when Oliver set him down looking.

On the mound, though, Ben M was cruising, getting another flyball to center that Jordan N tracked down for the out, a strikeout, and a lineout to Dylan at third for another 1-2-3 inning. In the bottom of the third, the Weed picked up a couple of insurance runs after Sam beat out a single to short and Roan walked, moving up on a wild pitch and a no-throw advance to second respectively, then Taylor plated Sam with a hard groundout to third and Max singled in Roan with a single to the left side that the shortstop couldn’t come up with. 4-1, Legal Weed.

Ben M worked yet another 1-2-3 inning in the top of the 4th (K, flyout to center, K), then we failed to score in the bottom of the inning, despite singles by Yates and Ben M. Ben M finally faltered a bit in the top of the 5th, hitting leadoff batter Zane with a pitch, then uncorking wild pitches that let him move to second and third. One strikeout later, Taylor cleanly picked up a grounder to short but bounced the throw to first, as a run scored and the batter, Sam, made it to second. The next batter, though, lined out to Yates in left, and as Sam scrambled to get back to second, Yates easily threw to Ben C to force him for the double play.

The bottom of the 5th came down to two pitches: one that Dylan crushed to right-center, circling the bases for his second home run of the year (third if you count the one that was really more a single and an error, but I don’t); and one that Max smoked down the left field line for a round tripper of his own. Staked to a 6-2 lead (soon to be 7-2 after a flurry of walks in the bottom of the 6th) and having thrown a parsimonious 60 pitches through five, Ben M cruised through the final two innings, aided by a great leaping grab of a line drive by Dylan at short, and struck out the final two Miller batters for a nine-strikeout seven-inning complete game victory. Legal Weed 7, 78 Miller 2

In game two, Dylan faced off against lefty Ezra, who had held us to just three hits and one unearned run on the first day of the season. The Weed quickly gave notice that this would be no repeat: Jordan N beat out a grounder to third as the throw pulled the first baseman off the bag, then immediately stole second. Following a hard lineout to third by Taylor, Sam hit an easy grounder that the Miller shortstop muffed, sending Jordan N to third; Sam moved up to second without drawing a throw moments later. Max then went down swinging, but took off when the ball got away from the catcher, and the throw to first went wild, allowing Jordan N to score the first run of the game. Ben M followed by pulling a ball down the third-base line for a run-scoring double, then one out later, Roan picked up his 9th and 10th runs batted in of the season with an opposite-field double to left, for a 4-0 Legal Weed lead.

In the bottom of the 1st, Dylan got a quick groundout, then walked the next batter, Oliver, on some questionable calls. (There were to be a lot of questionable calls in game two.) Oliver stole second and third, then was sent home when Max’s throw down to third ricocheted out of play; Dylan whiffed the next two batters, though, and it was on to the 2nd.

We picked up another run in the top of the second on some shoddy Miller fielding: Leadoff hitter Shiloh grounded back to the mound but Ezra threw wildly to first, putting her on second; a wild pitch moved her up to third, then a poor throw from short allowed Taylor to reach with a single, driving in Shiloh.

In the bottom of the inning, Miller struck back: Leadoff hitter Gus reached on a hard grounder to short whose high hop Ben M couldn’t handle cleanly, then Zeke drew a walk. One strikeout later, Ezra stroked a single up the middle to score Gus. Dylan then uncorked a wild pitch, and Zeke sped for home — Max grabbed the rebound off the backstop, dove for the plate, arrived at about the same time as Zeke, and … there was an awful lot of dust, but the ruling was “safe,” and the Weed lead was now trimmed to 5-3.

We drew three straight walks to open the top of the 3rd, but came up empty after Max tried to score on a wild pitch, but was easily tagged out when the ball bounced straight back to the catcher, then Roan hit into a hard-luck double play lineout to second base. In the bottom of the inning, Dylan struck out the first two hitters he faced, then Emmett dumped a double into right field, and stole third. Gus next stepped to the plate and smashed a wicked line drive to left that at first looked playable, then took off over Taylor’s head, and didn’t stop rolling until it was in the infield of Field 6, as Gus circled the bases for a stunning game-tying home run.

The deadlock didn’t last long. A tiring Ezra departed in favor of the long-haired emergency reliever Hugo, and he walked Yates, got a forceout from Shiloh, threw two wild pitches to send Shiloh to third, then walked Ben C to put two runners on base. Jordan N jumped on a fastball to pull a groundout to short that went for the second out, but also drove in Shiloh to give us back the lead. Taylor walked, Sam hit a no-doubt single to left (his third hit on the day, stretching his hitting streak to nine games), then Max cleared the bases with a mighty clout over the head of the center fielder, ending up on third base with a triple — giving him a cycle (single, double, triple, and home run) across the day’s two games, something I for one have never seen in this league. Since Max was catching the next inning and there were two outs, Jordan N (the last previous out) ran for him, took a 30-foot lead when he spotted third baseman Emmett playing off the bag, then immediately raced home for another run as soon as Hugo threw over. (Hugo’s throw was wild, but after checking the scoring rules I’m pretty sure this still counts as a steal of home.)

Dylan was now staked to a 10-5 lead, but had already thrown 81 pitches and would need to complete at least two more innings to nail down the win. He helped his cause with a 10-pitch 4th (strikeout, grounder back to the mound, bloop single, flyout to left), then after we failed to score in the top of the 5th despite loading the bases, Samuel led off the bottom of the inning with a massive shot to right-center, which Jordan N ran down to hold him to a triple. That’s as far as he would advance: Dylan struck out Emmett, walked Gus, then struck out the next two hitters to complete a 12-strikeout, 110-pitch victory. Legal Weed 10, 78 Miller 5

That was a great day! We played well in all facets of the game, we got two wins, and we had lots of fun. And we’re now back over .500, with a 5-4-1 record, and headed into what should be an easier part of the schedule. We’ll get right back into it this afternoon at 4:45 pm on Field 2, against Holy Name Carmody, a former patsy (the last two times we faced them, three years ago, we no-hit them in one game and won 20-0 in the other) that reportedly has improved greatly this season. I’ll be at the field at 4 for warmups — see you there! 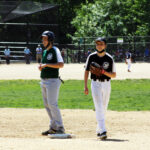 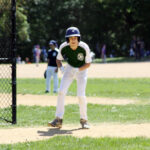 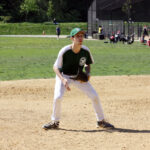 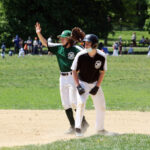 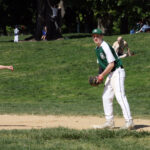 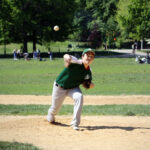 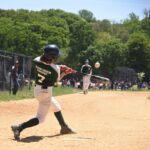 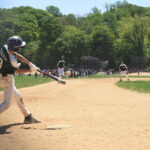 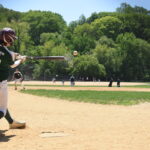 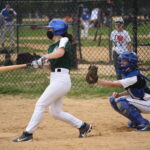 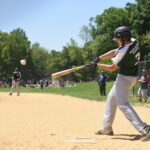