After last week’s rainout, it was nice and dry (if not quite as warm as the forecast) for today’s doubleheader of our as-yet-unnamed green team against Miller’s black-clad squad. Starting pitcher Dylan arrived just minutes before the scheduled game time, but fortunately the previous game ran slightly late, so he was able to take the mound as slated, setting down the first three Miller hitters in order on strikeouts.

Miller’s starter was Silas, who shut down our hitting in our epic faceoff last fall, but he clearly wasn’t as sharp today, giving up a ringing leadoff single to Ben M and then hitting Jordan G in the back to put a second runner on. Sam then pulled a grounder down to third, but the Miller third baseman tagged the base for the forceout. Jordan G and Sam then stole second and third, but Jordan G wandered too far from the bag and was picked off by Silas for the second out. Roan worked a walk, but Silas whiffed Ben C to end the threat.

Miller’s massive first baseman Samuel (see photo below for scale) led off the top of the 2nd with a liner to the left side that got past shortstop Ryan and didn’t stop rolling until Samuel had churned into third base. Dylan, though, stranded him there, setting down the next three hitters on strikeouts.

Our team only got one baserunner in the bottom of the 2nd, a four-pitch walk by Jordan N, then Dylan again went 1-2-3 with Ks in the top of the 3rd. In the bottom of the inning, Ben M and Jordan G both worked walks, but when Ben M took off for third too quickly, Silas turned and caught him in no-man’s land for his second pickoff. Sam then hit another ball hard, but the Miller shortstop (I think Zane, but my notes aren’t great here) made a phenomenal grab and then flipped to the second baseman for the force for out number three.

Dylan struck out Zane to lead off the top of the 4th, then Silas pulled a ball to the left side that skipped past Max for a single. Dylan, though — stop me if you’ve heard this before — struck out the next two batters, giving him 12 Ks in four innings of work.

Ryan worked a two-out walk in the bottom of the 4th, but was left stranded. In the top of the 5th, Oliver beat out a grounder to third, then went to second when the throw went awry. You already know where this is going: strikeout, strikeout, strikeout, and the score remained 1-0 Miller.

In the bottom of the 5th, our side finally managed to get some runners on base and keep them there. Jordan N led off by getting hit in the back by a wayward slider, then Max followed by beating out a grounder to third, with both runners advancing on a wild throw. This brought up Dylan, who hit a soft grounder to second, soft enough that there was no chance to throw home as Jordan N ran home with the tying run. With Max now on third, Silas faked a throw over to third — but didn’t step off the rubber first, quickly earning a balk call, and sending Max home with the go-ahead run. One out later, Jordan G got plunked in the tuchus, but Sam’s long fly to right was caught, so our lead remained just 2-1.

The way Dylan was going, it looked like that would be all we’d need: He struck out the first two hitters he faced with ease, running his K count to 17 of the first 17 outs. The next batter, Zane, however, managed a soft grounder to short, where Jordan N fielded it — and skipped his throw to Roan at first, allowing Zane to reach safely. It looked like Dylan would have a chance at yet another strikeout, but on the next pitch Zane took off for second, and Jordan G threw down to Jordan N, who deftly put on the tag for the third out.

Ben C delivered a no-doubt single to right center with one out in the bottom of the frame, but was stranded there, sending us to the top of the final inning, the 7th, with a narrow one-run lead. Dylan’s pitch count was still low, and he wasn’t laboring, so he got the chance to finish things off — and struck out all three batters he faced on just 13 pitches, securing the win and an astounding 20-strikeout complete game. deMause 2, Miller 1

After a short bathroom break, we went up to bat as the visiting team for the nightcap. Jordan N walked to lead off the game and moved up on a wild pitch, but a popup and two strikeouts stranded him there. Ben M took the mound for game two, and mixed speeds well but with also mixed results: a strikeout, a hit batter, a single through the left side, and a grounder to short that Ryan fielded cleanly but threw away, as two runs scored. A wild pitch sent the runner to third, and another wild pitch allowed him to score; Ben M struck out the next two hitters, but already we were in a 3-0 hole.

It didn’t get much better after that, as Miller’s lefty hurler Ezra was able to keep us off the basepaths as Silas hadn’t been able to: Sam singled in the 2nd and Jordan N in the 3rd, but neither could score, as our other hitters all struck out in both innings. Ben M held Miller off the board in the 2nd, but a single and three walks allowed another run to score and loaded the bases in the 3rd, before he struck out the next two batters to snuff out the rally. After we went hitless in the 4th, Sam entered the game in relief, walking the first hitter and then delivering a pitch that Cameron, who had struck out in his first three plate appearances on the day, absolutely crushed over Roan’s head in right field for an RBI triple. After a strikeout and another walk, Silas popped up to Dylan at third for the second out — at which point Cameron for some reason took off for home, and somehow made it safely after a subpar throw from Dylan, and a muffed catch by catcher Max as he tried to duck Cameron’s helmet, which flew off as he approached the plate. (We considered appealing interference to the umpires, but decided against it as no one had quite seen what had happened.)

Ben C got one more hit for us in the 5th but was again stranded. Sam walked the first two batters in the bottom of the inning, then gave up a long drive to center by Zeke, only to be saved when Jordan N turned, sprinted, and caught it over his right shoulder. We finally got a run in the 6th thanks to a throwing error, a stolen base by Ben M, and a pickoff throw from Ezra that went 20 feet over the third baseman’s head. We’d given up a couple more runs by then, though, and barring an eight-run homer we weren’t going to catch up; we didn’t get one. Miller 8, deMause 1

It was a mixed bag of a day, with some excellent performances (especially Dylan’s pitching and our always-good plate discipline) and some less-excellent ones (some errant baserunning and fielding, and way too many strikeouts) — all totally par for the course for the first day of the season. I’ll see if we can schedule some more batting practice this week; either way, I’ll see you all (except Jordan G and Ben C, who will be absent) Saturday morning bright and early at 8:45 am for our doubleheader against SFX Anderson, a team I know absolutely nothing about! 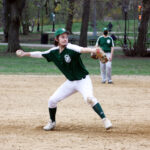 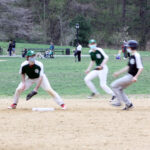 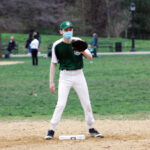