Our second of umpteen doubleheaders dawned bright and early, with our first game in two years against a team from the St. Francis league, which had opted out in the fall so it could play flag football instead. Our opponents: SFX Anderson, who wore Dodgers colors but not a Dodgers logo as in past seasons; further investigation is necessary to determine what prompted this move.

But enough about licensing agreements — let’s get to the games. Game 1 featured a duel of aces, Dylan for our side against Jonathan, whose right arm had helped carry Joel Steckel’s team to a championship two years ago. Jonathan struck out three batters in the top of the 1st, allowing only Ben M to reach on a throwing error by the Anderson third baseman. In the bottom of the inning, Dylan struck out three as well, but the first of these reached on a dropped third strike, stole second, moved to third on a groundout back to the mound, and then scored on a confusing play where he ran partway down the line to home, our catcher Max threw to third to try to pick him off, and then the runner was able to run home in the ensuing confusion, which I guess is technically a stolen base? (Further investigation necessary there as well.) In any case, as in his first start, Dylan was looking at a 1-0 deficit.

In the top of the 2nd, Shiloh and Dylan drew two-out walks, but Jonathan stranded them there as he completed another three-K inning. Dylan got two more whiffs in the bottom of the frame for a 1-2-3 inning. In the top of the 3rd, we started hitting Jonathan’s pitches, but without much better results: Jordan N smacked a hard line drive right to the right fielder, and Max punched a grounder down the first-base line that hit the bag and popped up right into the giove of the first baseman. Bottom of the 3rd: Three more swinging strikeouts for Dylan, who was keeping up his 20-K pace from his first start.

In the top of the 4th, Sam finally broke up Jonathan’s no-no with a no-doubt leadoff single up the middle, then stole second. After another strikeout, Roan pulled a grounder to the second baseman that he muffed for an error, then moved up to second without drawing a throw for fear of Sam scoring from third. Our next two hitters struck out looking, though, and the score remained 1-0.

It was 2-0 after the bottom of the inning, as Jonathan broke up Dylan’s own no-hit bid with a hard single just out of reach of our shortstop Ben M, stole second and third, then scored on a long flyball that Ryan expertly tracked down in right-center, then made a terrific throw on to almost nab the runner at the plate. (Okay, it wasn’t actually that close, but it was still a terrific throw from somewhere in the next zip code.) We went down on three straight strikeouts in the top of the 5th — oddly, all dropped third strikes where the catcher had to throw to first to complete the outs — and though Dylan struck out three more batters in the bottom of the inning (bringing his total to 12 on the day), he also allowed another run on a walk, a stolen base, and a wild pickoff throw that allowed the runner to score all the way from second.

Jonathan ran his strikeout streak to eight in a row in the top of the 6th, then Yates made his mound debut for the year in the bottom of the inning. Anderson’s team took advantage of our sloppy fielding to score another quick run on a single up the middle, a stolen base, and a couple of throwing errors; following another batter who reached on a dropped third strike and another on a hit-by-pitch, their #3 hitter Sam then crushed a ball down the left-field line that didn’t stop rolling until it was across the pedestrian path, for an easy three-run homer. (Thanks to that dropped third strike, Yates did manage to strike out four batters in one inning, for a ridiculous rate of 28 Ks per nine innings.) We mounted a late comeback attempt in the top of the 7th on singles by Roan and Ryan and a walk by Jordan N, but Jonathan struck out Ben M on a called “strike three” that was maybe six inches above the ground to preserve the shutout win. SFX Anderson 7, 78 deMause 0

Game 2 featured Ben M pitching for our side (I promise we’ll have a team name soon) and Game 1 hitting hero Sam on the mound for Anderson. Things started off with distressing familiarity in the top of the 1st, as Ben M struck out three batters, all looking, but the fourth (Jonathan yet again) singled to right, stole second and third, then scored when Shiloh’s throw from behind the plate went wild.

Our first two batters went down on strikes in the bottom of the inning, and then Max grounded to the second baseman, who dropped the ball, picked it up, made the short throw to the first baseman — and then he dropped it, giving us our first baserunner. We soon took advantage: Sam singled to left, Yates worked a walk to load the bases, and then Roan placed a hard grounder right down the left-field line past a lunging Anderson third baseman for a two-run single, and our first lead of the day.

It didn’t last long. The first batter in the top of the 2nd smacked a long fly ball to center, which Ryan tracked down for the first out. The next batter drew a walk, then Ben M induced a grounder just to the right of second to Jordan N — who flipped a slightly high throw to shortstop Yates on the bag, who failed to catch it: both runners safe. Following an error on yet another errant pickoff throw, Ben M got a swinging strikeout, but the tying run scored as the third strike was dropped and Shiloh was forced to throw down to first for the second out. Another run scored on a grounder to Roan at first that he failed to make a play on, followed by a wild throw back from the outfield. Finally, #10 hitter Esteban, who hadn’t even started the first game, hit a shot to left that hit the ground and just kept rolling, ending up somewhere in the middle of a Peewee game down the hill for a two-run homer, and a 5-2 Anderson lead.

We got nothing in the next two innings (aside from hard lineouts by Jordan N and Sam, who both seem to be afflicted by at-‘em ball disease this spring), but Ben M shut down the opposing side without incident as well, erasing Anderson’s one baserunner, who had walked and stolen second and third, with a nifty pickoff where he ran straight at the runner who had wandered off third, tossed to Shiloh at home, and then Shiloh ran him down until he veered out of the basepath and was called out.

In the bottom of the 4th, Roan led off with yet another well-hit ball to the opposite field, which the Anderson left fielder settled under — then dropped for an error. Shiloh and Dylan worked walks to load the bases, then Ryan cracked a flyball to right that was caught for an out, but Roan was able to tag and score to close our deficit to two runs. Jordan worked a four-pitch walk, re-loading the bases and bringing up Ben M — who launched a shot into the left-field jet stream, the ball rolling until it ended up back in the crowd around that same Peewee game. The umpire signaled “dead ball”; Ben M started to head back to second, then was told that no, it was being ruled a ground-rule triple. (There was much confusion as Anderson finally retrieved the ball and tried to throw Ben M out at third, but the ball was dead and he was entitled to the base.) He was eventually stranded there, despite another hard-hit ball that ended up right at an Anderson fielder, this one by Yates; regardless, we were now back in the lead, 6-5.

Ben M shut down the opposition in an efficient nine-pitch 5th, mixing two called strikeouts with an easy grounder to Roan at 1st — so efficient, in fact, that we would have to have a long bottom of the inning to hit the 1:50 time limit, which we had thought might be within easy reach. We gave it our best shot nonetheless: Roan led off with yet another single to left, and Dylan followed one out later with a dying-quail single to right. After Ryan hit into an unusual 7-4 force play (Dylan had had to hold up partway to second to see if the ball would be caught), Jordan N raced to first to beat out a grounder to the third baseman for an RBI single, then another run scored when the throw went wild. Ben M followed with another popup to shallow center that fell for a hit, with Jordan N scoring our 9th run of the game in the process.

In the top of the 6th, which really would be the last inning due to time constraints, Ben M induced the first batter to hit an easy grounder to third — or at least it looked easy until the ball hit a clod of dirt and bounced ten feet over Max’s head for a single. Following two stolen bases and a strikeout, Sam unleashed another mighty blow to left-center, but centerfielder Ryan raced over to make the play with deceptive ease, and even though the runner tagged and scored, we were now one out away from victory. A few pitches later, Ben M froze the hitter with a breaking pitch (changeup? further investigation necessary) for strike three, and we had completed our comeback to salvage a split. 78 deMause 9, SFX Anderson 6

The pros and cons of this season are rapidly becoming clear: Our pitching is phenomenal, with a ridiculous 57 strikeouts in 24 innings, though some of that may come from opposing hitters not having had much batting practice yet; and when we hit the ball, we hit it hard, though too often so far right at opposing fielders. (Our batting average on balls in play is .381, down from .459 last fall and .508 the previous year; that’s a sure sign of hitting in bad luck, which should even out over time.) On the down side, we are striking out way too often (44% of plate appearances, up from 31% last fall), though facing excellent pitchers hasn’t helped there; and we’re making too many errors (eight in yesterday’s doubleheader, many of them on throws that didn’t need to be risked in the first place), though hopefully some of that is rust to be shaken off as well.

Unfortunately, field availability and the weather have made it hard to hold practices; if any players are interested in trying to practice around 3 on a weekday afternoon when Prospect Park fields are free, let me know and I’ll make the gear available, though I’ll be at work then so wouldn’t be able to join in. (A trip to the indoor Red Hook batting cages is a possibility as well, though players may feel more comfortable with that once they’re fully vaccinated.) Our next games are next Sunday, May 2, once again a doubleheader starting at 8:45 am on Prospect Park Field 3, vs. 78 Nachsin, who we beat handily in our one matchup last fall (a weird 6-2 win in which Dylan pitched a no-hitter but gave up two runs on walks and wild pitches and which ended with the lights abruptly shutting off after five innings); I’ll get myself there by 8 am so we can have some actual pregame practice for anyone who can drag themselves out of bed that early. 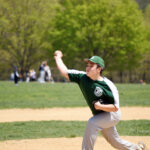 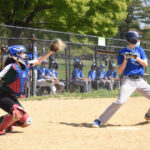 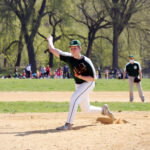 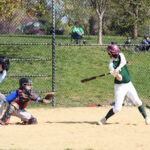 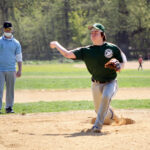 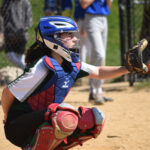 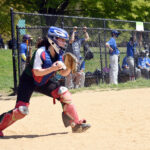 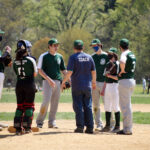 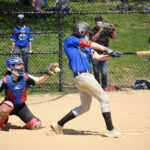 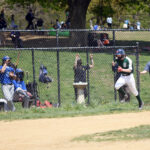 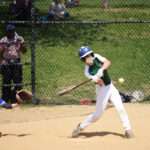