The Legal Weed — yes, we have a team name, and yes, that’s it, far be it from me to argue with either democracy or genius — gathered bright and early for our 8:45 am doubleheader vs. 78 Nachsin, with our full squad even getting there early for pregame practice. Unfortunately, the same couldn’t be said of Nachsin’s team: Thanks to the PPBA schedule maker listing only a single 10:45 am game on their schedule while we had two games listed on ours, they didn’t show up in time for the first game, so we had to recalibrate for a single-game matchup. More fortunately, Jordan G had a great idea for a scrimmage of three four-player teams (one team bats, the other two play the field), and everyone had a great time and a great practice playing amongst themselves for an hour and a half until we could start the real game. (I have no idea of the score of the scrimmage, but it was something ridiculous like 7 to 5 to 2.)

A coin toss left us the visiting team, so we batted first, and though Jordan G got hit by a pitch — an incredible third plunking in just his third game of the year — and stole second and third, Nachsin starting pitcher Charlie worked out of the jam without incident. In the bottom of the 1st, Dylan struck out the first batter, but the second, Eamonn, singled up the middle and stole second; then the next batter struck out, but the ball hit the ground, and instead of throwing to first for the easy out Jordan G threw down to third to try to get the lead runner, but Eamonn was able to scramble back to second — everybody safe. No worries, though, as Dylan sent down the next two batters looking to preserve the scoreless tie, and chalk up a rare four-strikeout inning.

The Weed started getting to Charlie in the 2nd: After Ben C smacked a long line drive to center that was caught for the second out, Max delivered an even longer line drive to left-center that rolled down the hill toward the dog beach, ending up on third with a triple. Yates was up next, and pulled a single through the left side to put the Permitted Pot up 1-0.

Dylan struck out the side in the 2nd following a leadoff single, then stepped up to the plate to lead off the top of the third. At this point, Dylan had all of one squib single since May of 2019 (though plenty of walks), but he made up for that in a hurry by blasting a shot over the head of the right fielder that rolled and rolled, as he circled the bases for our first home run of the year — in fact, our first home run since Yates hit one way back in 2016 — for a 2-0 lead.

Dylan got three more Ks in the bottom of the inning, wrapped around an epic clout by Eamonn to left-center that easily could have been a home run if it hadn’t hit a kid in the Peewee game in deep left field, the umps ruling it a ground-rule triple. That brought the Weed back up in the top of the 4th, and at this point the wheels came off for poor Charlie: Sam led off by bouncing a high-hopping single off the third baseman, then Ben C drew a walk to put two runners on. Max pulled a hard grounder to the third baseman, who decided to try to tag Sam rather than the bag, and dropped the ball on the tag, allowing Sam to race home with our third run. Charlie then hit Yates with a pitch to re-load the bases, walked Taylor to force in another run, and walked Jordan N on four pitches to force in another. Jordan G was up next, and came within a foot or two of a mammoth grand slam to left field — with the help of Google Maps, he later estimated it landing 344 feet from home plate, but just barely foul — then followed that up with a single up the middle that scored Yates to make it 6-0.

And we weren’t done yet: Ben M draw another RBI walk, bringing Nachsin out of the dugout to bring in the lefty Eamonn in relief. Two pitches later, Roan smacked one of his trademark opposite-field line drives to left, as both Jordans scored. That was it for the scoring, but we were now sitting on a 9-0 lead with Dylan at just 55 pitches (thanks, Shiloh, who had to sit out the game with a hamstring strain but took over pitch-count duties instead) through three innings.

Perhaps the long top of the inning got to Dylan’s command a bit, as he walked the first two hitters in the 4th. Both were erased, though: leadoff hitter Brant after he stole second and then tried to steal third but was gunned down by a nifty throw by Jordan G and tag by Max; and Charlie after Nachsin’s Ben C pulled a line drive to left that took off on Ben M, causing him to have to leap to grab it, then make a terrific peg down to first, where Roan pulled it in to force the runner for an inning-ending double play.

The Weed loaded the bases in the top of the 5th (a dropped third strike and two more hit-by-pitches, including yet another one for ball magnet Jordan G, who now has four in just 10 plate appearances), but failed to score. Dylan set down the home team in order in the 5th on just nine pitches (two Ks and a groundout to Ben M at first), then in the top of the 6th Sam became the next Weed hitter to hit an almost-homer, crushing a ball into the crowd in deep left and racing all the way around the bases, before the umps conferred and agreed that, like Eamonn earlier in the game, he should be limited to a ground-rule triple. Dylan worked around a pair of singles in the bottom of the frame with three more called strikeouts, and we had just enough time to start the 7th inning before we would hit our 12:40 pm drop-dead point.

Yates led off by reaching on a throwing error by the third baseman, then after one out, the umps declared that our next hitter would be the last of the game. It was, naturally, Dylan; and he, naturally, hit yet another ball hard to left, where it skipped past the left fielder as he circled the bases for … another homer? As unofficial official scorer, I felt obligated to rule it a single and an error, but if Dylan wants to claim he hit two home runs in one game, on top of striking out 15, I won’t argue it too hard. Legal Weed 9, 78 Nachsin 0

That was a fun game, and it was great to have a full turnout (less our supersub Ryan) for the first time this year. We definitely won’t be at full strength for our two games next Sunday vs Shiffman at 12:45 and 2:45, or for our game the night after that vs. Camp Friendship — Jordan N is definitely out for Sunday as probably Dylan is as well, and Dylan is likely out for Monday as well where Jordan N and Sam will both be late — so please let me know ASAP if your player might miss any of those games. (And Ryan, we will definitely need you then if you can make it.) 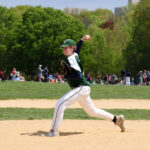 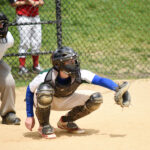 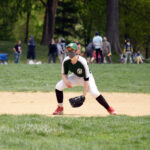 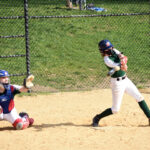