Well, that was … you know, rather than try to summarize it, let me just tell it as it happened.

Today was our first (and only of the regular season) doubleheader matchup against 78 Shiffman’s Raiders, who were undefeated so far this year (and who had crushed us twice last fall, after we had knocked them out of the playoffs in 2019). First pitch was a little after 12:45 pm, which was a nice change from our usual standard of having to leave the house before 8 am.

The first four innings of Game 1 were a parade of whiffs by Dylan and his Raiders counterpart Graeme: 9 Ks for Dylan through four, 8 for Graeme. Dylan gave up a pair of hits in that time, but picked off Sergei trying to steal third and stranded Boomer; we got baserunners on a leadoff walk for Jordan G, a catcher’s interference call on Ben M, and a dropped third strike that Shiloh reached base on, but Jordan G was picked off (according to the base ump, anyway), Ben M was stranded, and Shiloh was erased on a looping liner that the Weed first base coach (that’d be me) didn’t warn her to stay close enough to the bag on.

In the top of the 5th, David and Toby hit back-to-back one-out singles to left, then advanced to second and third on an error. Dylan struck out Boomer for the second out, then got a grounder to Yates at short, who made a late, wild throw to first, as two runs scored to break the scoreless deadlock.

The Weed could do nothing off Graeme in the 5th and 6th, though Ben C did manage to sneak a grounder past the second baseman for our first hit of the day. Sergei made it 3-0 in the 6th with a home run to left-center — aided by a lump of sod that tripped up center fielder Taylor as she tried to cut off the ball — and Toby smacked another solo homer to deep left in the 7th.

Down 4-0 in the last of the 7th, we needed to start to hit Graeme, and finally did: Jordan G led off with a duck snort to center that fell for a single, then Sam pulled a grounder off the third baseman’s glove to put two runners on. After a strikeout, Dylan walked to load the bases. One more K followed, then Ben M pulled a single to left, scoring two runs and putting the tying run on base. Graeme sent down Taylor swinging to end it, however, and our comeback fell just short. Raiders 4, Legal Weed 2

In Game 2, it was Ben M facing off against lefty Raiders hurler James; we were the visiting team for this one. (The weather had also started to turn nasty, with what started as a light mist early in the second game turning into a steady light rain as the afternoon progressed.) We jumped on James’ control issues early, Jordan G leading off the game by beating out a single to short, Ben M getting plunked in the thigh, then Sam singling to left to load the bases. One strikeout later, James plunked Roan in the back, then after another strikeout, Yates drew a walk to make it 2-0 Legal Weed.

In the bottom of the 1st, Graeme led off with a walk, then stole second and third. Ben M got Sergei to pop up back to the mound, but Efram followed with an opposite-field clout to left-center, circling the bases for a two-run homer as the ball rolled down the hill toward the dog pond. Ben M got the next two hitters on a called strike three and a grounder back to the mound, but the game was all tied up.

The Weed didn’t get a baserunner in the top of the 2nd. In the bottom of the inning, Ben M struck out the first batter, then gave up a single to center by Boomer and a walk to put two runners on. He whiffed the next batter for the second out, but James snuck a grounder past a lunging Shiloh at second for a hit; when Ben C wasn’t able to play the ball cleanly in right field, two runs scored, putting us down 4-2.

We failed to reach base again in the top of the 3rd, though at least all three hitters made contact (flyout to center, grounder back to the mound, foul popup to first). In the bottom of the inning, Shiloh made a terrific snag of a hard grounder by Sergei for the first out; an error and a hit batter put two runners on, but Ben M induced a popup to Yates at third and a strikeout to snuff out the rally.

In the top of the 4th, Sergei took the mound for the Raiders, and immediately showed off his promised control issues, walking Roan to put the leadoff runner on; he then got a strikeout and a rare 6-4-3 double play, though, to get out of the inning. Ben M struck out the first two batters in the bottom of the 4th, then got into two-out trouble again, yielding a double to left and a walk before getting another infield popup to end the frame.

In the top of the 5th, Taylor led off and pulled a line drive to the left side — where the Raiders third baseman was able to pick it off just before it hit the ground for the out. A strikeout followed, and then things started to turn our way again, as Sergei walked Ryan, Jordan G, and Ben M to load the bases. Sam pulled a hard grounder just barely fair down the third-base line, driving in one run and bringing up Dylan, who had been elevated to the cleanup spot for today’s games. And Dylan came through, looping an opposite-field fly ball down the right field line that fell in for a two-run double, and a 5-4 lead. Roan then looped an opposite-field ball of his own to left that fell just beyond the grasp of the converging third baseman and shortstop, as Sam scored to make it 6-4 Legal Weed.

Ben M was up around 90 pitches at this point, but made clear in no uncertain terms that he wasn’t at all tired (“and I’m not just pulling a Max Scherzer”), so took the mound again for the bottom of the 5th, as we all watched the skies and our weather apps to see if the game would continue to its conclusion. After a leadoff popup to the mound, a late-arriving Jordan N entered the game as a defensive replacement in left, shifting Yates to right. An infield error (I can’t remember what kind, and my pencil was by now just making illegible marks on my sodden scorecard) let Efram reach second, bringing up cleanup hitter Lou. He cracked a hard line drive to right center field — only to have Yates, racing over from his new position in right, make an astonishing diving catch for the second out. A walk followed, but Ben M struck out Toby to send the game to the 6th.

We badly needed some insurance runs here, but didn’t get them, as new Raiders pitcher Eli struck out the side. That sent us to the bottom of the 6th, which might or might not be the final half-inning, depending on the clock and the rainclouds. Ben M, working on fumes, started off by getting a grounder to short, but Sam wasn’t able to get a handle on it, and Boomer reached on the error. After a strikeout for the first out, Ben M got another groundball to the left side, this time to Dylan at third — who threw the ball past Shiloh at second, putting runners at first and third. The runner on first took second without a throw, then Ben M whiffed James, but the third strike hit the ground; Jordan G, though, alertly picked up the ball, looked the runner back to third, then threw to first for the second out.

Ben M then plunked Graeme, loading the bases and setting up a force at any base. Sergei worked the count to, I believe, 2-2, then hit a hard grounder to short, where Sam fielded it — then threw past Shiloh at second, as what looked like an inning-ending out turned into a three-run play, and gave the Raiders the lead.

From there, there isn’t much worth telling: An Efram double to left and another hit batter led to Ben M finally being removed from the game, at which point Dylan came in to get the final out of the inning. That took a while — there were some hits and a couple more errors before it was all over — and by the time he got it we had run out of time to play the 7th, resulting in a really tough-luck loss. Raiders 13, Legal Weed 6

The mood in the dugout after these two wasn’t great, especially as we had seeming victory in the nightcap turn into defeat on a single play. (It’s worth noting, though, that we still would have had to play one more inning at that point, as there was still plenty of time left, and Ben M’s arm was being held on with string and chewing gum; I lost track of the pitch count somewhere, but he had to be well over 110 pitches.) If there’s an upside to today’s games, it’s that we showed we can play with any team in the league — the top two teams are Shiffman, who we nearly beat twice today, and SFX Anderson, whose only loss so far this year was at our hands two weeks ago. Our pitching has been phenomenal (both Dylan and Ben M deserved better fates today), our hitting has been solid, and we’ve made some great defensive plays. Our two achilles heels are striking out too much at the plate and making too many errors in the field — which, as Jordan N pointed out to me on the way home, tend to improve as the season goes on, but if we can get in some more practice so we can have more reps both swinging at and fielding balls, that would certainly be good as well. (It can only help that half our team will start playing either school baseball or softball this week.)

Our next game is not even 24 hours away: 6 pm tomorrow on Prospect Park Field 3, against a Camp Friendship team I know nothing about. (Assuming the field dries out by then, anyway.) We should have the bare minimum eight players there at game time, maybe nine if we’re lucky, and Jordan N is again set to arrive late after his soccer match. Let’s build on what we did well today and hope for a deservedly better outcome. 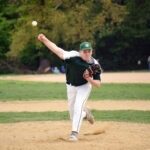 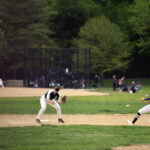 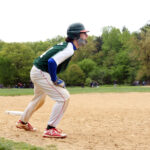 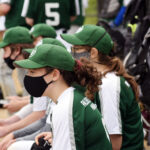 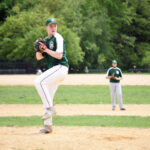 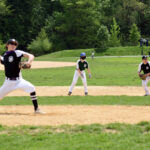 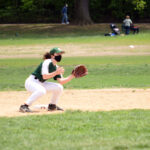 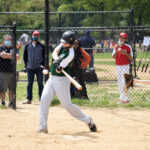 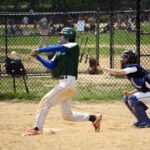 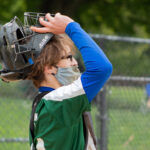 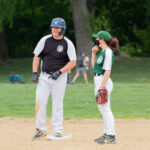 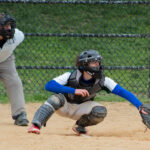 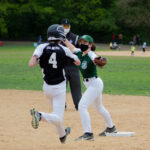 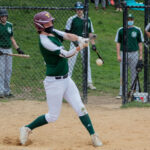 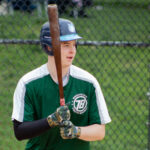 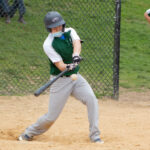 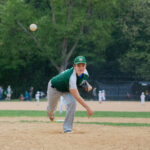 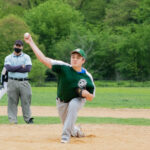 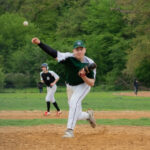 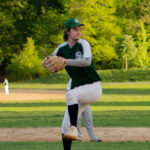 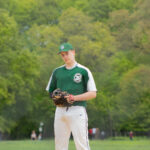